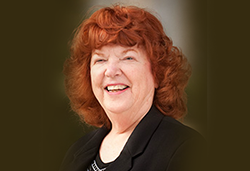 When Phyllis Gibbs retired from the Flagler College faculty in the summer of 2015, she was more than accustomed to being asked about her incredible tenure in the Theatre Arts Department. Her career had long been a topic of conversation: as the College's longest-serving faculty member, Phyllis is an uncanny bearer of institutional memory and history and can easily produce stories of the early days of Flagler College—stories of an all-women student body, professors living on campus, and the unending trials of trying to jump-start a college in a historic hotel badly in need of restoration. Phyllis joined the faculty in 1969, just one year after the College's inception. Her retirement in 2015 capped 46 years of teaching, directing productions, mentoring students, and chairing the Theatre Arts Department. It also marked another important milestone—Phyllis' creation of a bequest to ensure that promising Theatre Arts students continue to have the opportunity to earn a degree at Flagler College.

A Jersey girl by birth, Phyllis attended Montclair State University (then Montclair State College) and earned a BA in English Education and Theater and subsequently an MS in Ed with high honors from Eastern Illinois University. She made her way southward and soon found herself teaching English and Speech at Chiefland High School in Levy County near Cedar Key, about 130 miles across the state of Florida from St. Augustine. She made frequent trips to St. Augustine and on one Saturday passed the Hotel Ponce de Leon, where a sign caught her eye. It stated that the Hotel would soon be a college and that applications for teaching positions were available at the main desk. She applied, knowing full well that she was under contract for one more year at Chiefland.

That impulse led to a life-changing decision. In 1969, she joined the faculty of one-year-old Flagler College, and in doing so, she charted a course that would ensure her legacy as one of the leading Theatre Arts educators in Northeast Florida, and certainly one of the most beloved professors of thousands upon thousands of students. She has produced and directed more than 50 productions at Flagler College and has supervised more than 50 productions by student directors. In 2014, she was awarded the St. Johns Cultural Council Dr. Gail Pflaster ROWITA award for her achievements and contributions to the arts in St. Johns County. Her legacy at Flagler is preserved both through the countless memories she helped her students and colleagues create and through the naming of the 48-seat Rahner-Gibbs second stage at Lewis Auditorium.

But her long, successful career notwithstanding, there was a niggling detail that Phyllis felt unresolved as she prepared to teach her last year's classes before retirement.

"I've always felt that we don't have enough scholarships at Flagler College in general," she said. "And the Theatre Arts Department in particular has always been lacking in scholarship opportunities for students." It was important, she explained, to create something that would make sure there was nothing standing in the way of a Theatre Arts education at Flagler College for worthy students who sought it. "We have many students who emerge in our department as real do-ers," she said. "These are very special students who do so much for our program, for their fellow students, and for advancing Theatre Arts. Sometimes a student might look on paper as if there is not a pressing need for financial assistance, but I've seen very committed, outstanding students who have to work two jobs in order to be able to continue their education at Flagler."

To help contribute to a solution for this problem, Phyllis has partnered with Flagler College's Office of Institutional Advancement to create the Phyllis Gibbs Endowed Theatre Arts Scholarship Bequest, which names Flagler College as the beneficiary of $25,000 upon Phyllis' passing. This gift will fund an endowed scholarship that will help offset tuition and fund other educational opportunities for students majoring in Theatre Arts at Flagler College.

"For me, it's not really about legacy or about being remembered," she said, laughing. "After 46 years, I think I'll be remembered around here, for better or for worse. But the bequest is about helping to make sure that the types of special students I've encountered throughout my career have continued access to higher education in Theatre Arts. We're advancing the art that we all feel passionate about. That's a very satisfying notion, for me."