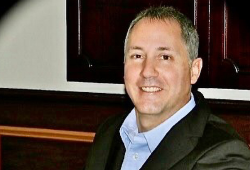 To say that David Iannone is a proud alumnus of Flagler College would be an understatement. David graduated from Flagler in 1986, with a degree in History and pursued a career in the insurance industry. After relocating to southwest Florida when he graduated, David started and then opened his own insurance agency, Flagler Insurance. If the name of his multi-million-dollar insurance agency doesn't attest to his love for Flagler College, his planned gift surely does. To solidify his passion for Flagler College, David made a gift by designating the College as the beneficiary of a Life Insurance Policy which includes him as a new member of the Henry M. Flagler Society. David's love for Flagler developed as not just a love for the college, but for the incredible legacy that Henry Flagler himself left behind.

During his time at Flagler College, David fondly reminisces about a semester he spent in West Palm Beach at none other than Henry Flagler's "Breakers" property while working at the Palm Beach Country Club. There, he rubbed shoulders with America's elite. Having had the privilege to spend time at two of Henry Flagler's grand properties during his young adult life, David made it a priority to "make enough money to be able to give back and create his own legacy.."

With a successful insurance career under his belt, David sold the business in 2015 and is glad the new owners kept the name he gave it over 20 years ago. David even hangs his own insurance license at the Flagler Insurance Agency and is proud to have that as a part of his life and legacy. David also makes time to play a sport that he loves, tennis. An avid player since the age of nine, he only played tennis leisurely during his time at Flagler College, knowing that being both a history major and a college athlete would have left little time to enjoy his college experience.

It's for this reason that his planned gift will fund a new scholarship, the David A. Iannone Endowed Scholarship for History. This scholarship will be awarded to a Flagler College history major, with a preference given to a student on the men's or women's tennis team. David understands the discipline that goes along with playing sports at the collegiate level while also focusing on the rigors associated with being an excellent student in a field like history.

In addition to funding the Dr. Thomas Graham Endowed Scholarship, David also made a gift to name an office in the Alumni House.

Having no kids of his own, David is proud to be able to help a Flagler College student of this caliber explaining that, "giving back to someone less fortunate feels good." David shares that he plans to continue his support of Flagler College and its students today and well into the future.

For more information about how you can leave a legacy through a beneficiary designation of a life insurance policy or retirement plan, please contact Nicole Pece at 904-819-6406 or Npece@Flagler.edu.